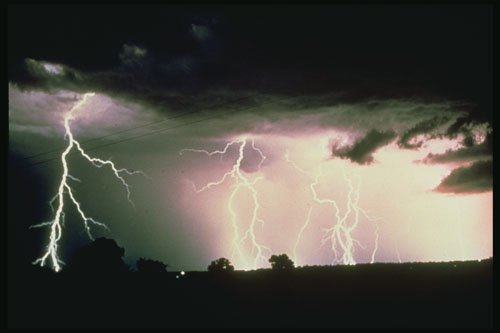 What is static electricity?

All matter is composed of tiny things called atoms.  Each atom is composed of even smaller particles called electrons and protons.  Electrons and protons each carry charges; electrons are negatively charged; protons are positively charged.  Most objects start off with a nuetral charge, meaning they have an equal ratio of protons to electrons.  However, as two different objects come into contact with one another, electrons transfer from one object to another, forcing one object to have an excess number of protons and the other to have an excess number of electrons.  This causes the objects to have either a possitive charge or negative charge, depending on which, electons or protons, it accumulates an excess of.   Objects of opposite charges attract to each other in order to correct each others imbalance of electrons and protons.  (Remember that objects are trying to become nuetral.)  When one object is largely charged either possitive or negative and comes near another object of the opposite charge, a spark will jump across the space in between the two.  This spark is an electron transfer from one of the objects to the other.  This whole process is known as static electricity.

Static electricity then builds up between the earth and the cloud and eventually a negatively charged spark in the form of an invisible lightning bolt comes down from the cloud.  As this bolt reaches towards the ground it is met with an upward moving positively charged spark.  The two charges collide, an explosion occurs, causing us to see a flash that we call lightning.  The positive charges from the ground travel up the bolt to neutralize the cloud.

A great lesson plan can be found here.  A lot of in class expirements and other great links.

Another great source that explains lightning in depth.  Included on this site are diagrams that show how and why lightning occurs.

Contains a great photo of lightning and also explains the three different types of lightning.